What I learned from my recent miscarriage

I debated rather to write about this publicly. Many of our close friends, coworkers, clients and family already know but it's always vulnerable to put it "in cyber space"...but I felt God prompting me to.

Here's a bit about my history...my first child (from a previous marriage) was born at 26 weeks and lived for only 2 months. Most likely I had an incompetent cervix. I had to painstakingly make the decision to turn off the machines when his tiny 2lb body just couldn't thrive any longer. I held Jake in my arms as he took his last breath. I'll never ever forget it. I can pull up that night in my head in an instant and remember whispering "go with God, He'll take care of you now" as I rocked him.

After Jake died, I got pregnant again (again, in my previous marriage) and as I was going through the pre-op for the cerclage (that's where they stitch your cervix so you can sustain a pregnancy), the doctor did an ultrasound. At 16 weeks I learned I had had a miscarriage. Devastating.

Fast forward many, many years and two little boys later, it's January of this year and we learned, shockingly, that I was pregnant. I say shockingly because I already suffer from PCOS (poly cystic ovary syndrome) which means, among other lovely side affects, I don't ovulate regularly. In November the doctor tested me and said I wasn't likely ovulating since my cycles were 35 days apart (anything over 32 usually means you're not). True enough my hormone levels were too low to say I was ovulating. Daniel also has diagnosed fertility issues with his swimmers. Let's just say not all of them are mature enough to swim in the deep end.

We had already tried for a year...or as Daniel liked to put it "we weren't preventing". He wasn't 100% on board with the third child idea but willing to let God work if that was what He wanted for our family. So with the test and the time "not preventing" we just assumed it wasn't in God's will for our lives. Despite feeling for a few years that our family wasn't complete, I accepted it wholeheartedly. I was already blessed with two fantastic little boys. So we sold or donated all of our baby gear. Neither of us felt that going to the fertility specialist again was necessary either. So we got rid of everything and I mentally shifted gears to being a four person family.

Back to recent events...This pregnancy was normal as far as I could tell. We saw the heartbeat at 8 weeks and I had all the normal symptoms. Essentially I hibernated for 7 weeks because I was too nauseous and tired to do anything else. The nausea tapered off around 10.5 weeks but the rest of the symptoms remained.

Imagine our surprise when we go to the 12 week appointment (which was later than normal due to spring break) and we hear "this isn't a normal pregnancy" as they are doing another ultrasound. In fact, it wasn't a pregnancy at all. The heartbeat was gone and nothing was even barely visible.

Deep down I had a constant nagging feeling that I needed to see the heartbeat again at 12 weeks to really feel excited. Maybe that was mother's intuition kicking in.

We left the doctor's office and as soon as we were in the car we both wept. How could this happen? God gave us a pregnancy we thought was impossible. God changed Daniel's heart to be ecstatic and joyful when we learned I was pregnant. The boys were thrilled about being a big brother and having a baby  in mommy's tummy. Our house was settled and could accommodate a third child. I bought a minivan last fall for pete sake!

I admit, I was bitter. I was angry. I was confused. In a matter of three months I went from being completely at  peace being a family of four to the shock of being pregnant (along with all the symptoms) and then excited my dream was coming true to feeling empty.

On Friday I was numb. On Saturday I had a complete meltdown. I essentially was a grown-up toddler mad, frustrated and angry that this happened. I asked myself: What was the point? I was perfectly content with our two beautiful boys if that was God's will. Why would I get pregnant and get my hopes up only to take them away?

I knew Sunday would be hard. I knew going to church on Sunday would be hard. Ironically it was three days after learning we lost the pregnancy. I was supposed to be joyful celebrating that Jesus has risen. My family was in town and we had an Easter lunch at our house along with the kid's joy in getting their Easter baskets. I was dreading it. I walked in to the sanctuary and instantly teared up. I walked to get tissues and ran in to friends who were kind and understanding. I cried more. I wasn't OK.

During the service I tried to stay numb. But then we stood up to sing "In Christ Alone" one of my favorite hymns. I remember muttering "oh great, of course it's this song", still feeling angry. And then I started to sing. It was then that I had a choice. I could stay bitter and angry at God or I could trust His character and rest in Him.

So I raised my hand in praise and sang, as best I could through tears, "In Christ alone, my cornerstone...here in the blood of Christ I stand". It was there that I let go of the bitterness and anger. I chose to praise Him in this storm.

I may never understand why we had a miscarriage this time. But I can always trust in Jesus, His character and His love for me. And that's enough.
Posted by Anna at 6:36 PM No comments:


When we moved in we changed the color of the floors. We went from a red stain that was popular back in the 1950's (when the house was built) to a browner color (specifically Provincial). What we didn't change were the doors, which were all still stained to match the original red floors. It didn't bother me too bad but I knew they needed to be done and I needed a project that was simple but made an impact. I needed a pick-me-up. 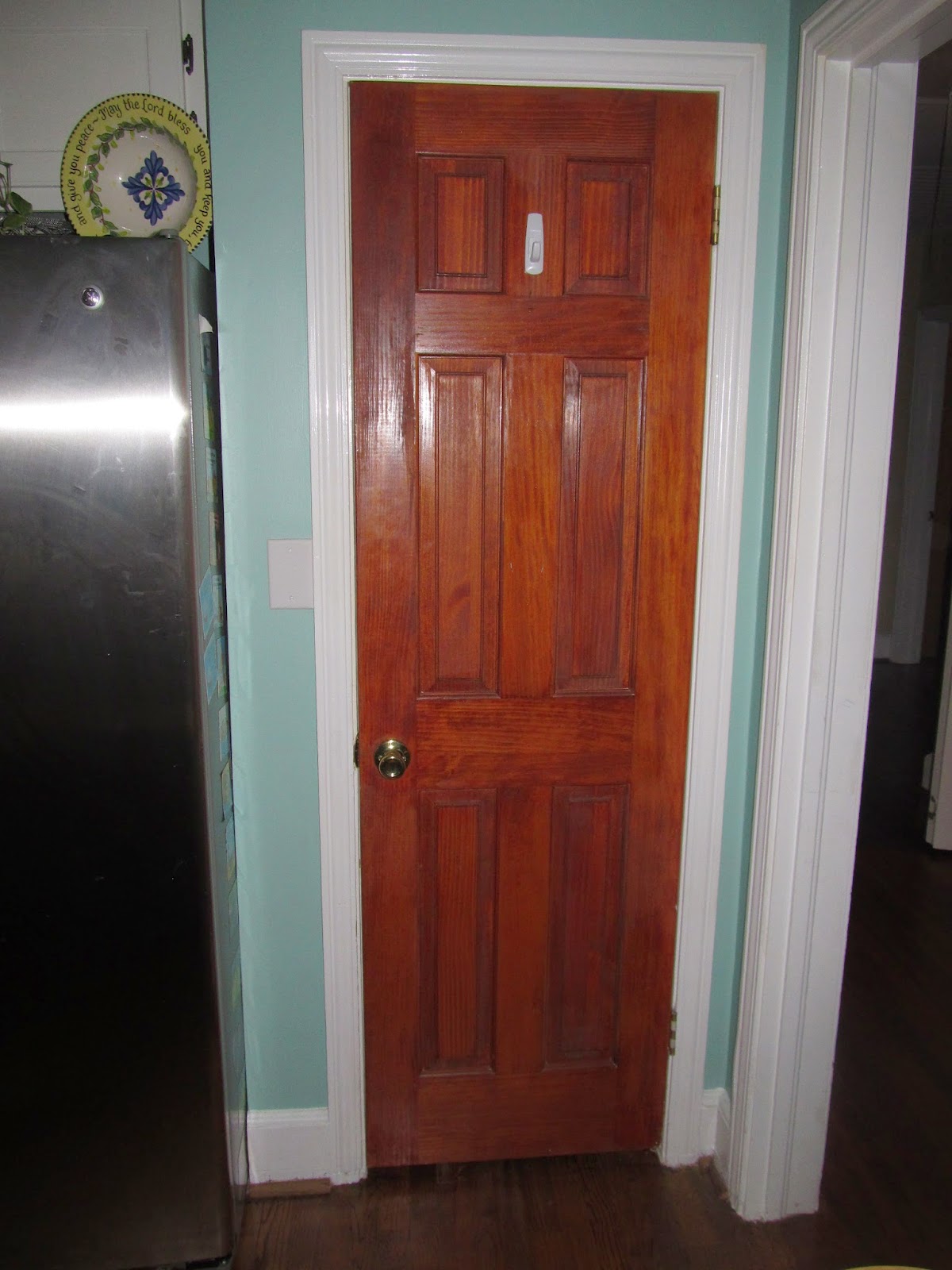 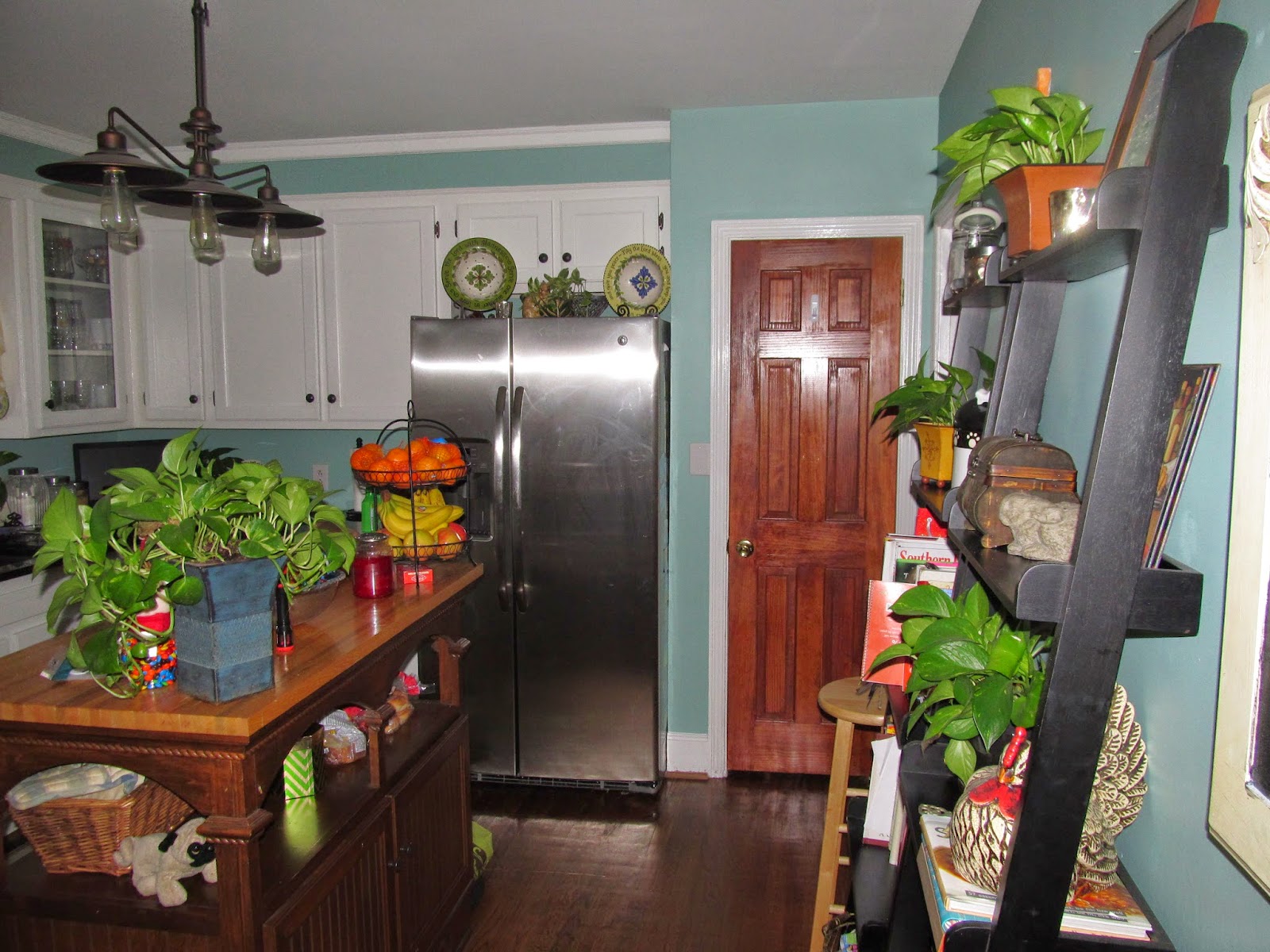 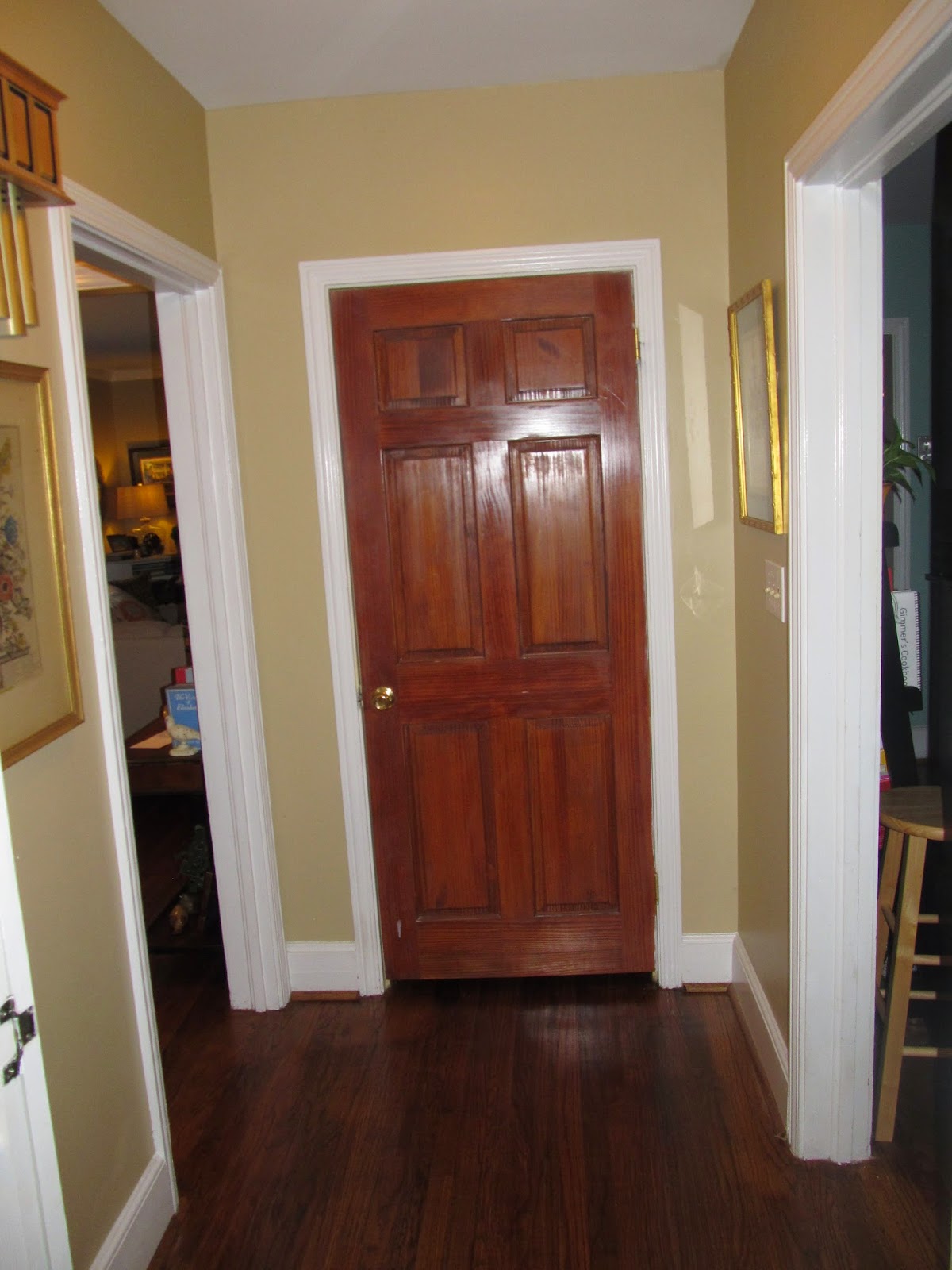 You can see in those pictures that the floor is more brown than the red doors. Another problem was the condition they were in. When the reno was being done, not a lot of precautions were taken to protect the doors. Not a big deal since I knew I didn't want them to remain that shade. But you can see all the paint drips and over spray on them below. 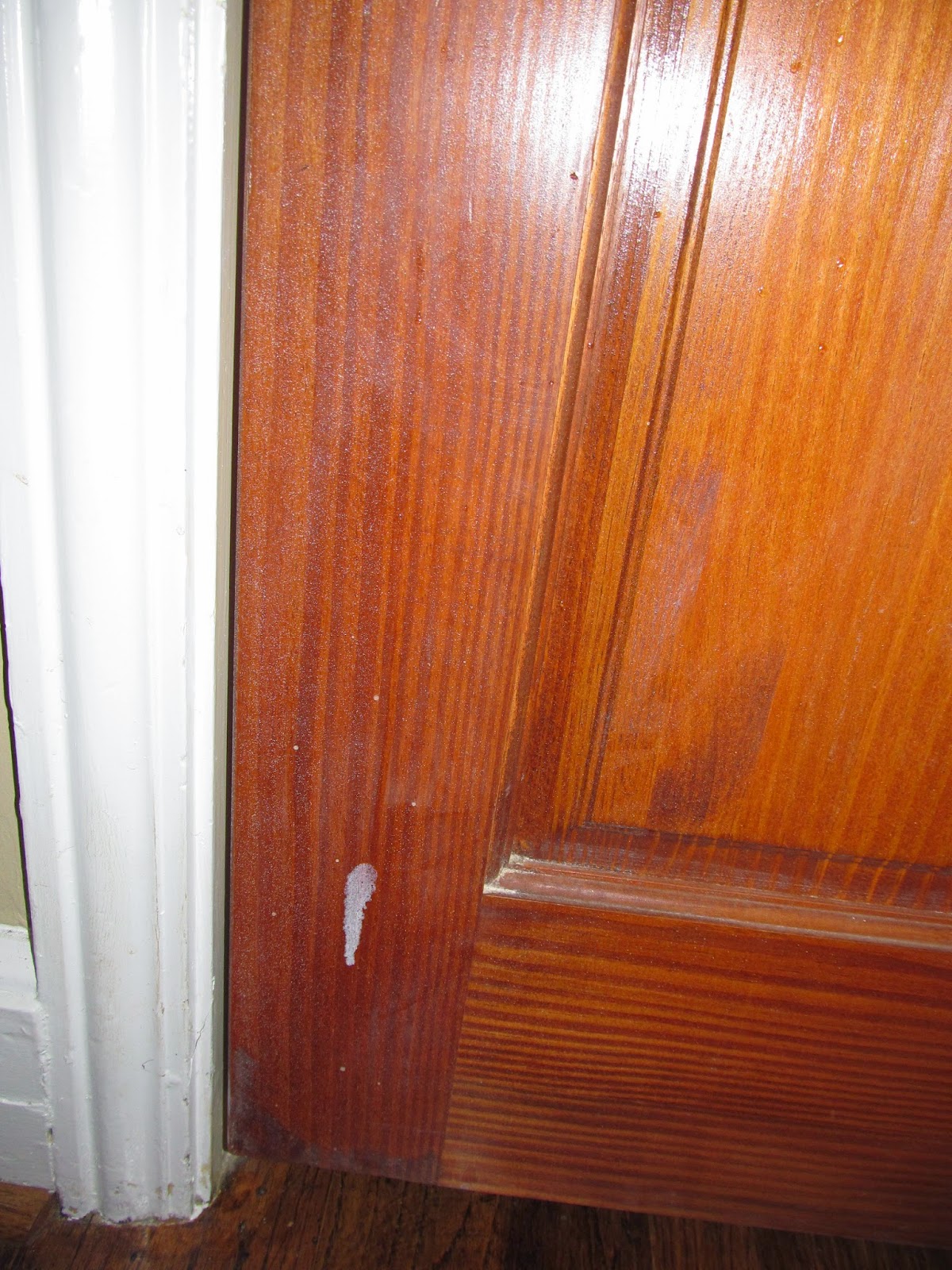 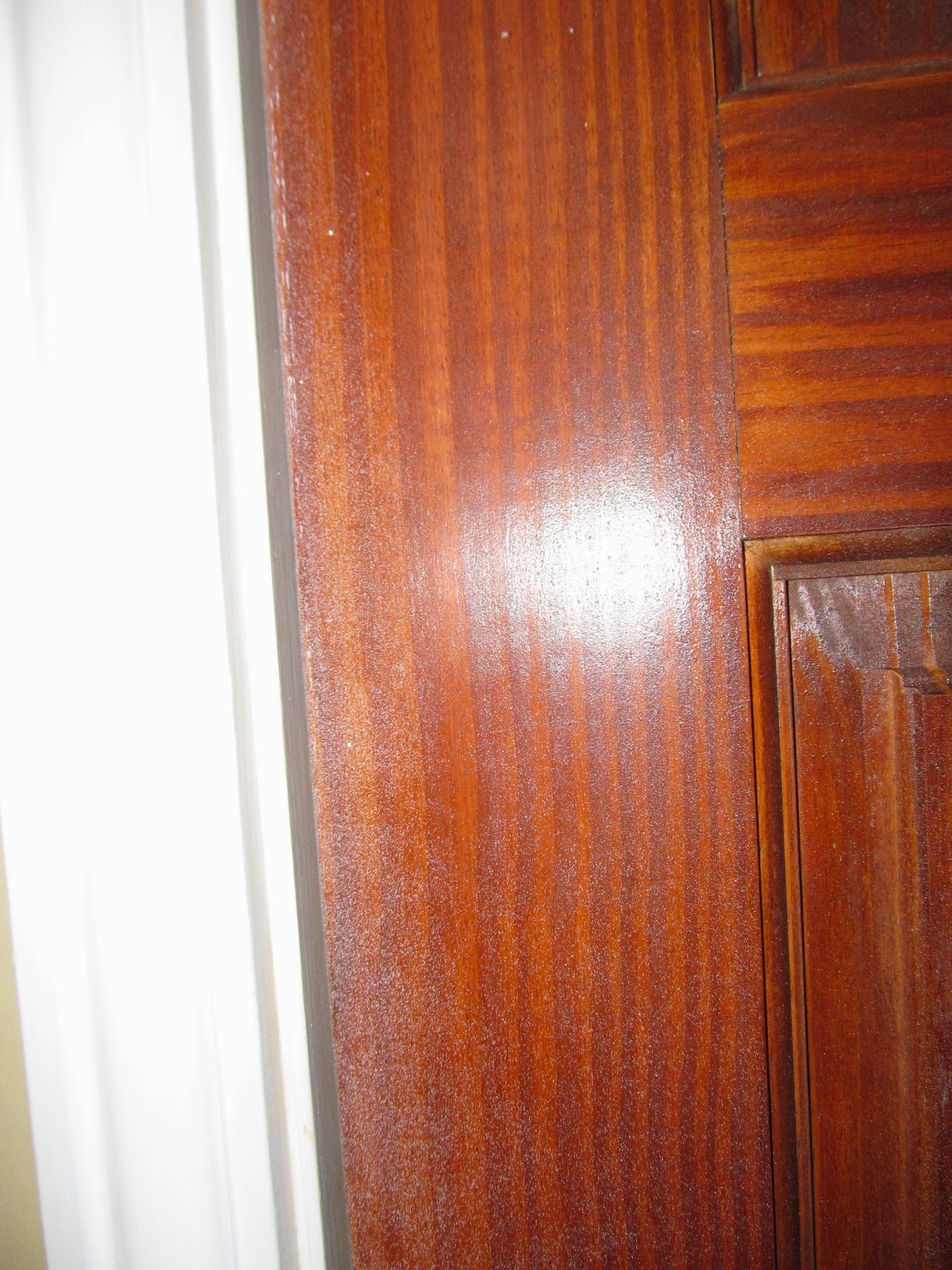 So then the big decision had to be made...1) take them down, sand them (including all those panels) and stain them in Provincial or 2) paint them.

Hmmm...let me think for point two five seconds. Painting it is! Let's face it. I love a good project but I'm not one to have patience to sand and stain 11 doors. I mean I might as well just move out at that point. So then the next decision had to be made - what color?

Now let's briefly talk about door colors. The one we're all familiar with is white. Everyone tends to default to the good 'ol white. It's like that old sweatshirt that you automatically go to when you're cold. But I knew I wanted to step out of the box. A color would have been too much in our house. Since the house is more traditional in nature, a funky color might have been too much. I recently went in to a house that had the most gorgeous gray walls and the doors were a shade or two darker. SO pretty!  But that house was newer and more contemporary.

I went with a classic color: black. Glossy, shiny black. When I painted the first door, the one into the office/man room, Daniel said it looked like a black coffin door.

Thanks for the support, honey.

(he later got on board) 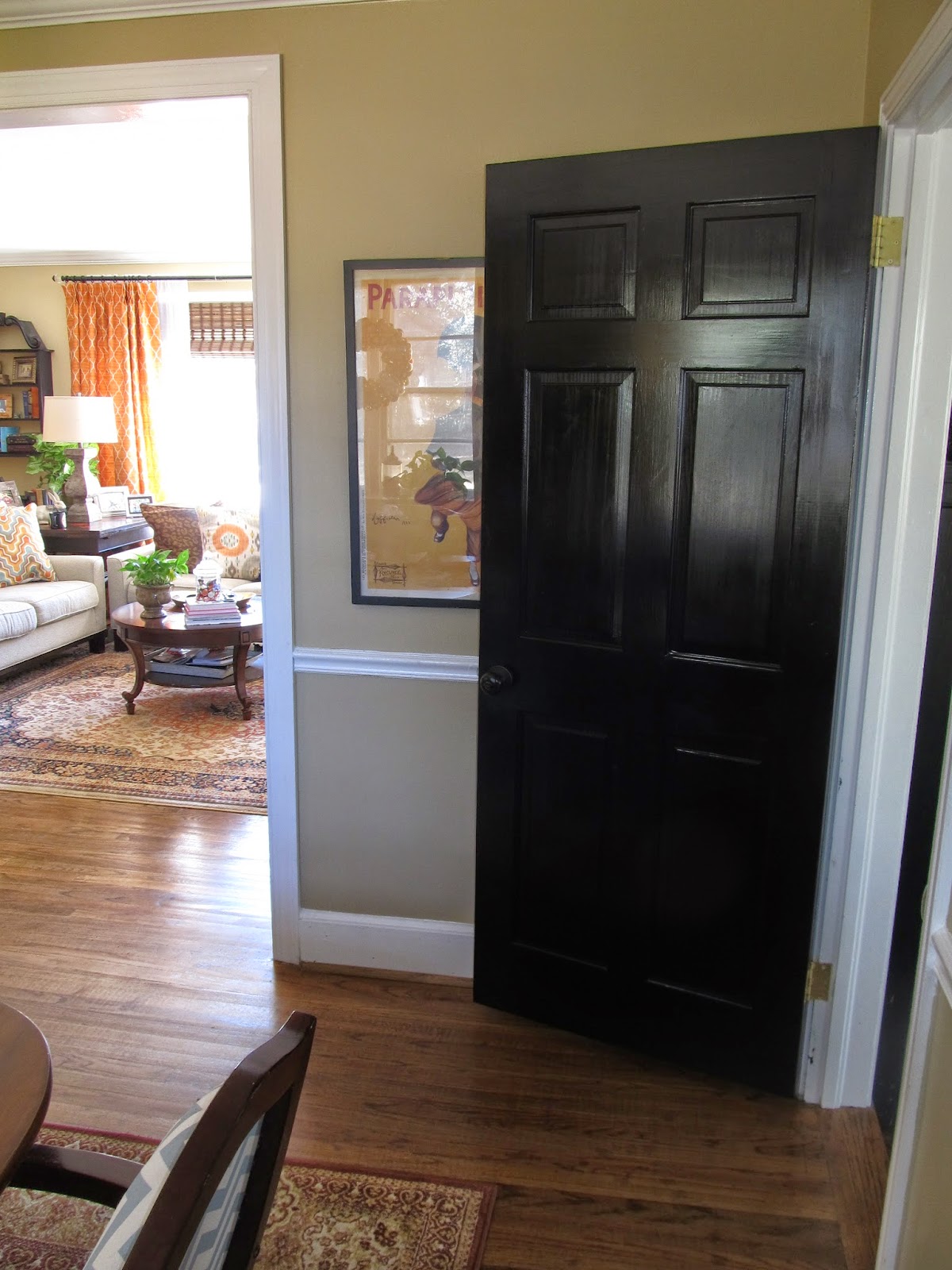 I took a few weeks to get them done because I needed one side to dry before tackling the next side. I used a glossy black from Sherwin Williams (already mixed) and in an oil base because I wasn't willing to denature all the doors and hope latex stuck Plus let's face it oil-based paint holds up better.

When I paint with oil I go ahead and budget for multiple paint brushes because I just toss them at the end. I never have luck cleaning them so that they brushes are usable again. Plus I wear latex gloves so my hands don't get covered. And maybe because things like this happen courtesy of the kiddos. 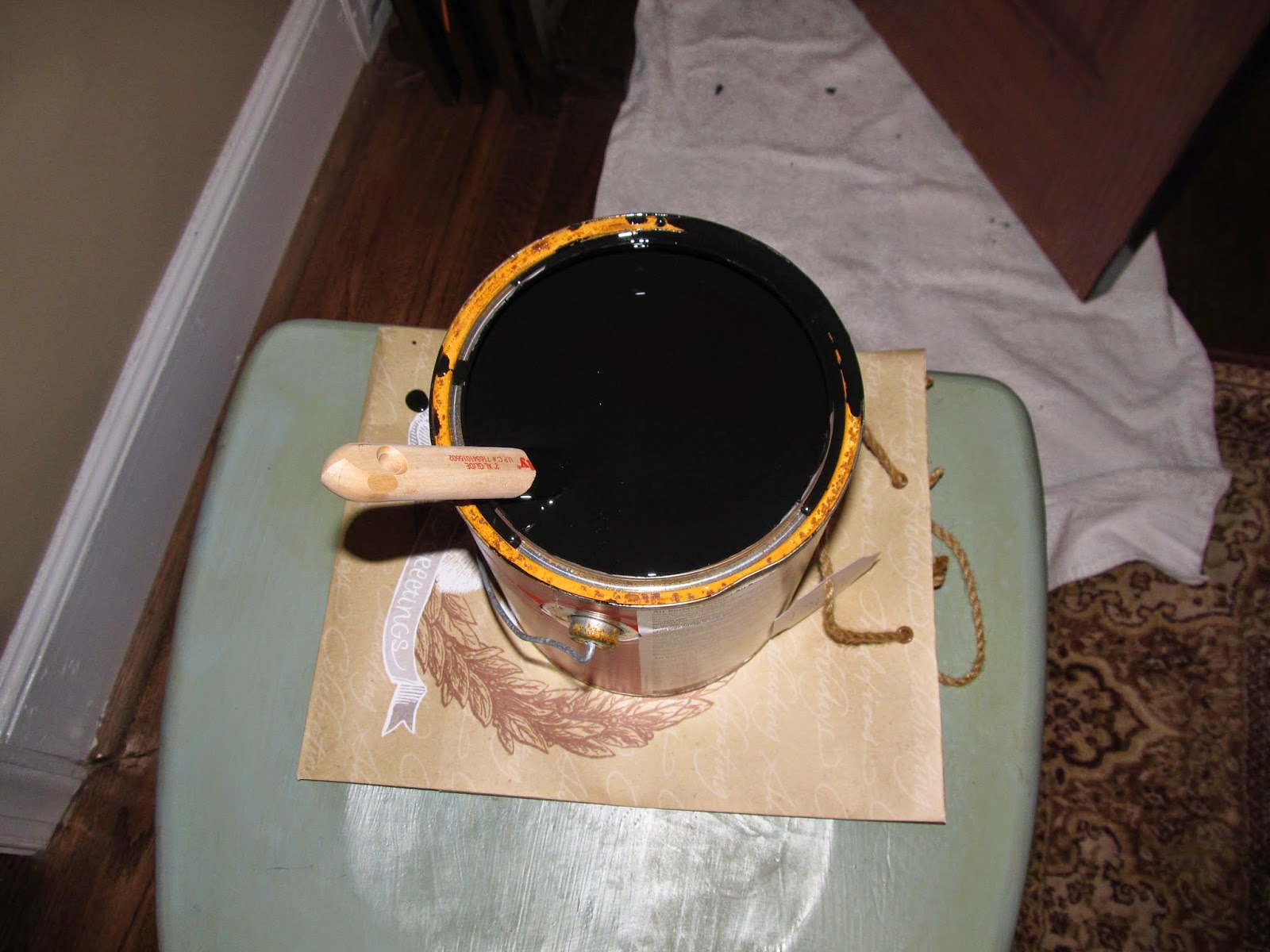 Yes, that's the paint brush they tossed in to the ENTIRE CAN of paint. That took me a bit to clean up. Shockingly, other than a few hand prints here and there, they managed to stay out of the wet paint on the doors and none was spilled and no major catastrophes occurred.

In the end, I can't even imagine them any other color. I love them. And the paint high is over and I still love them. Here are some before and afters you can oooh and ahhh over. 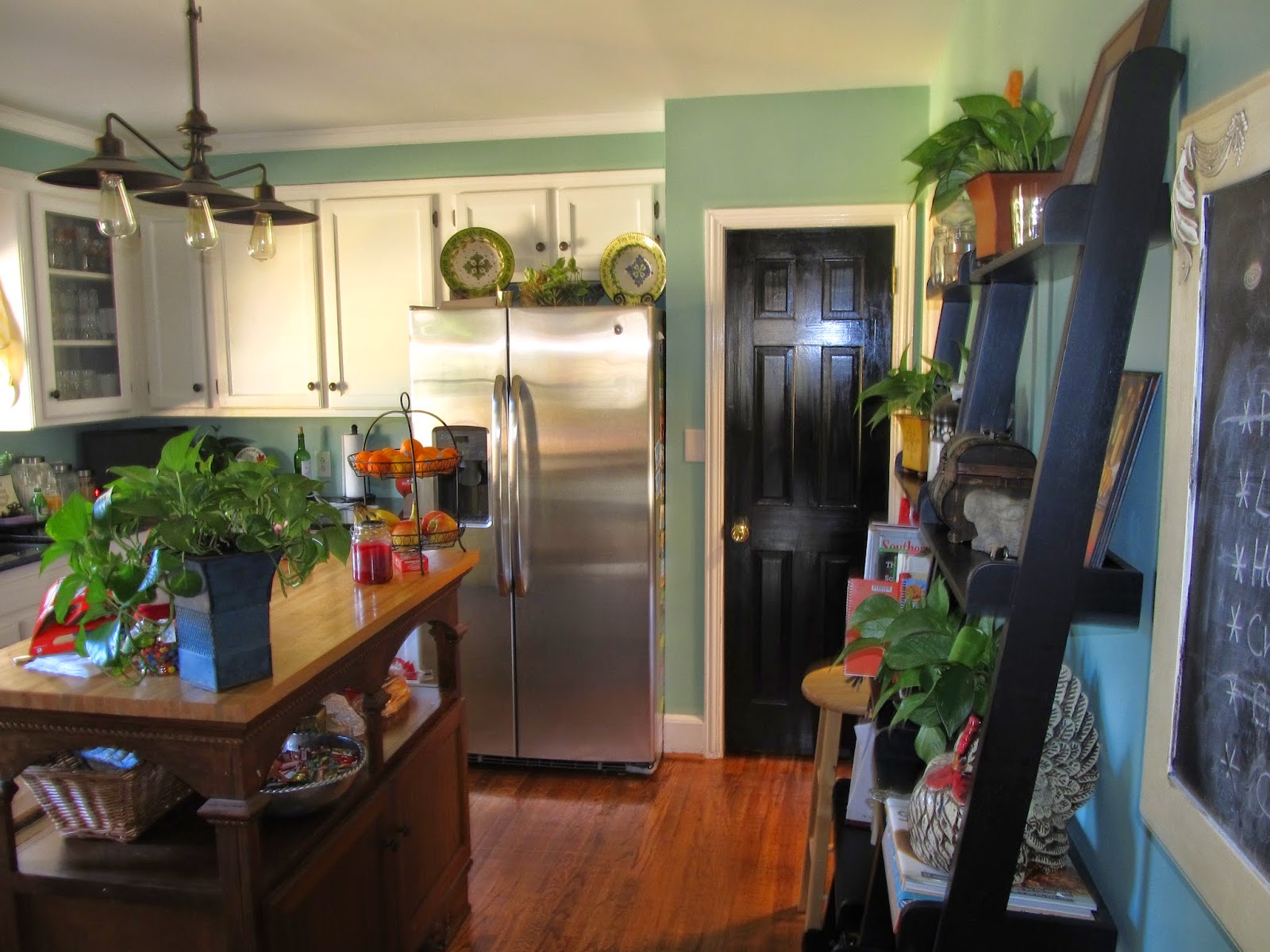 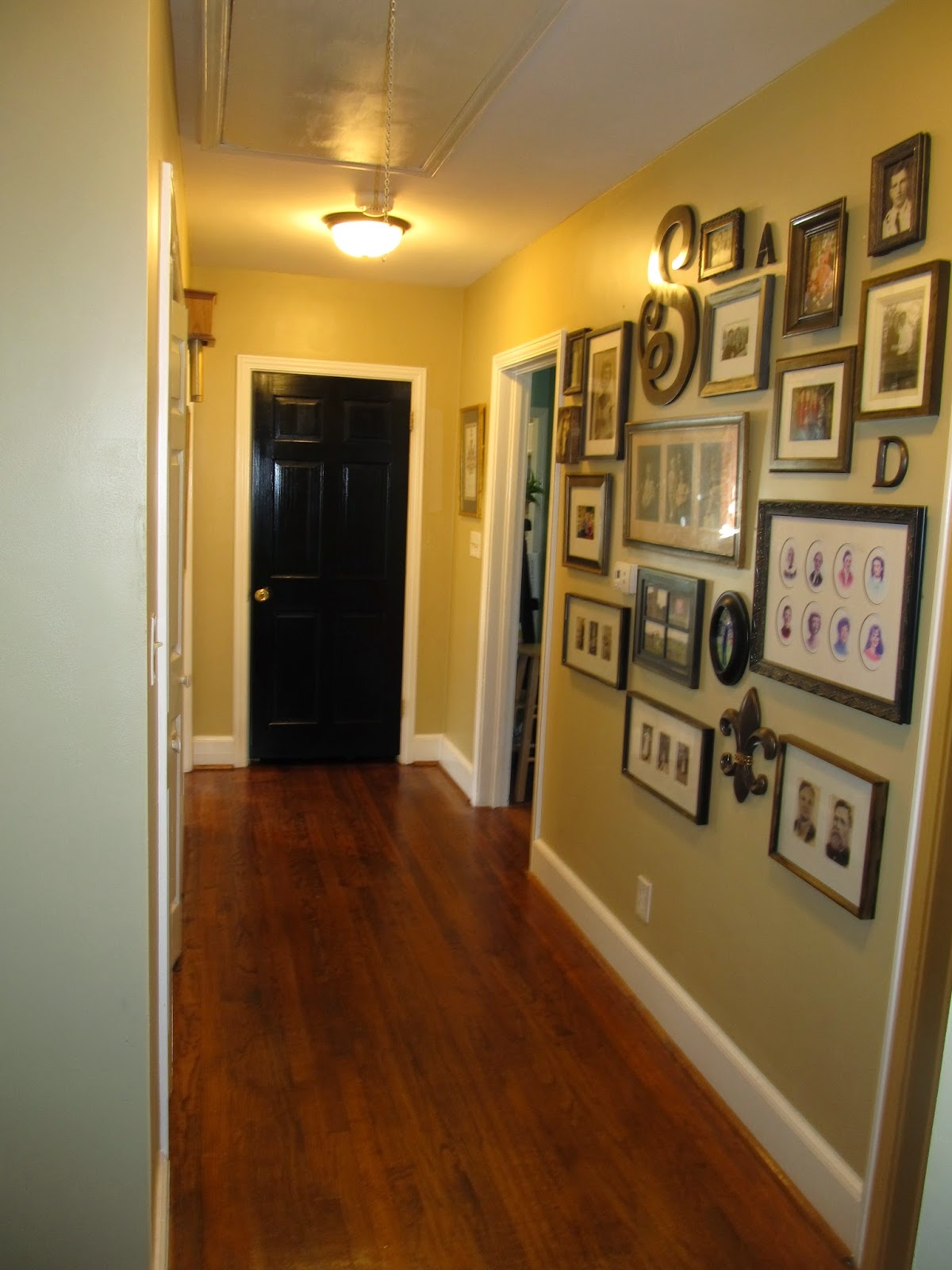 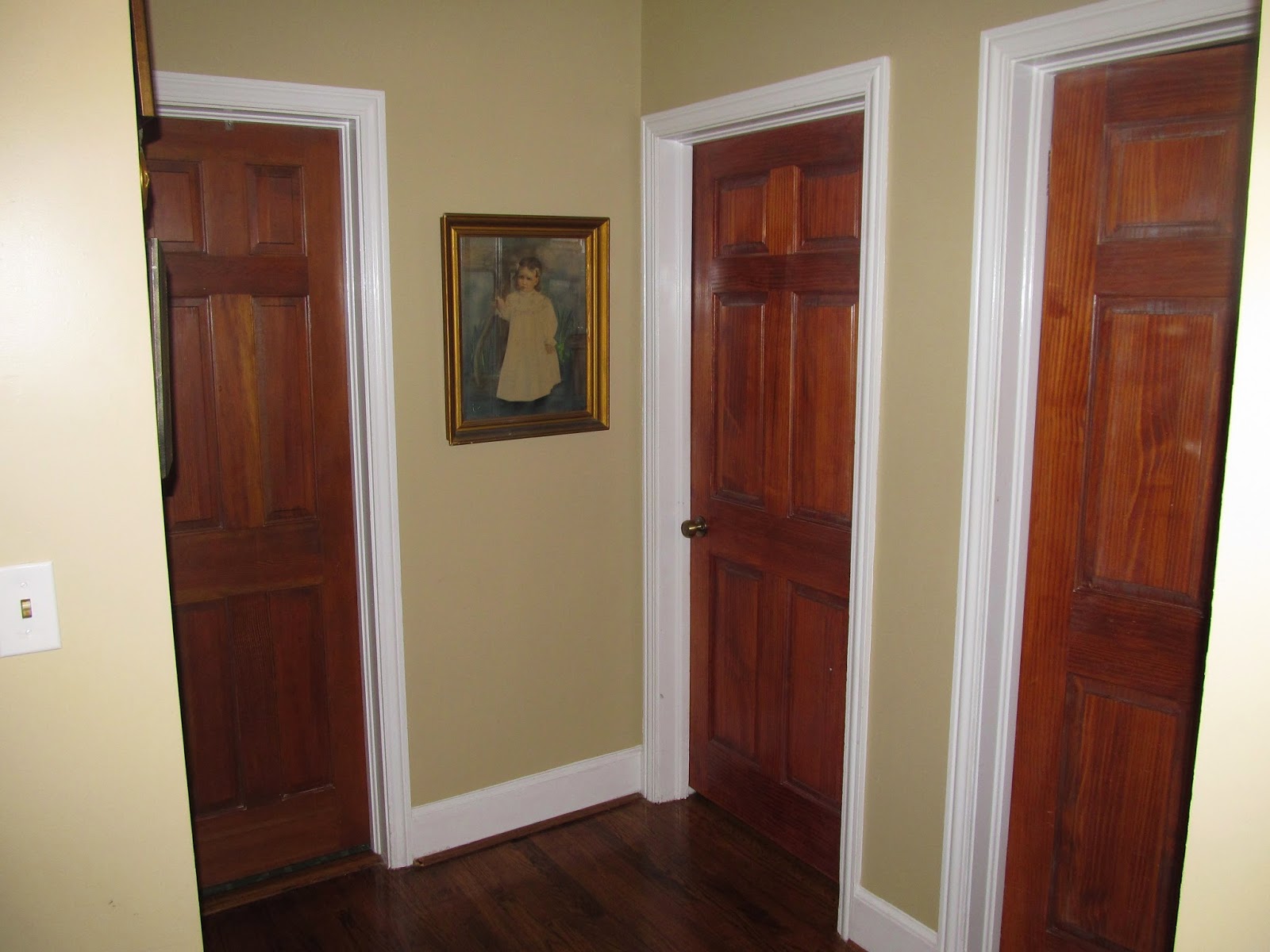 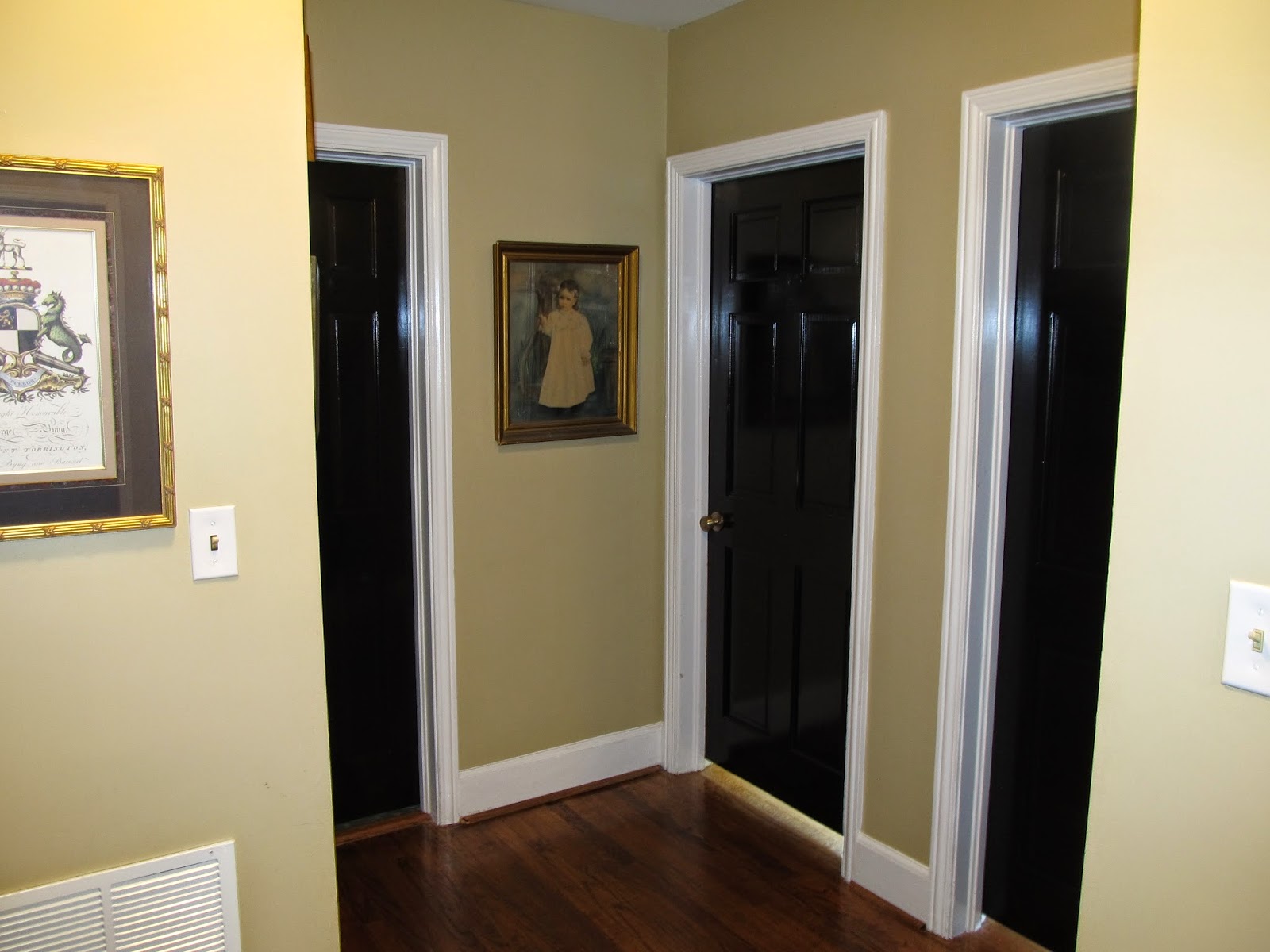 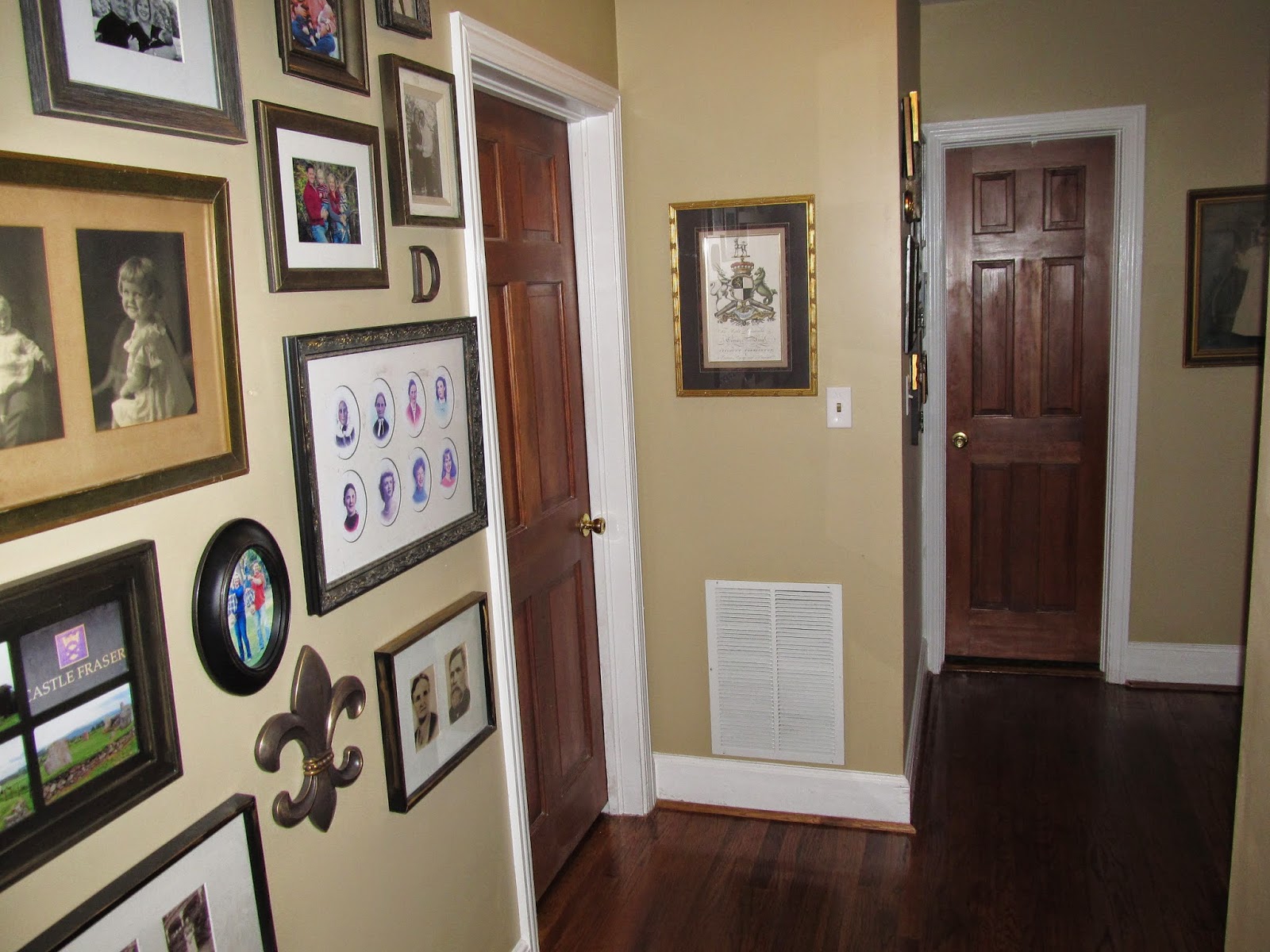 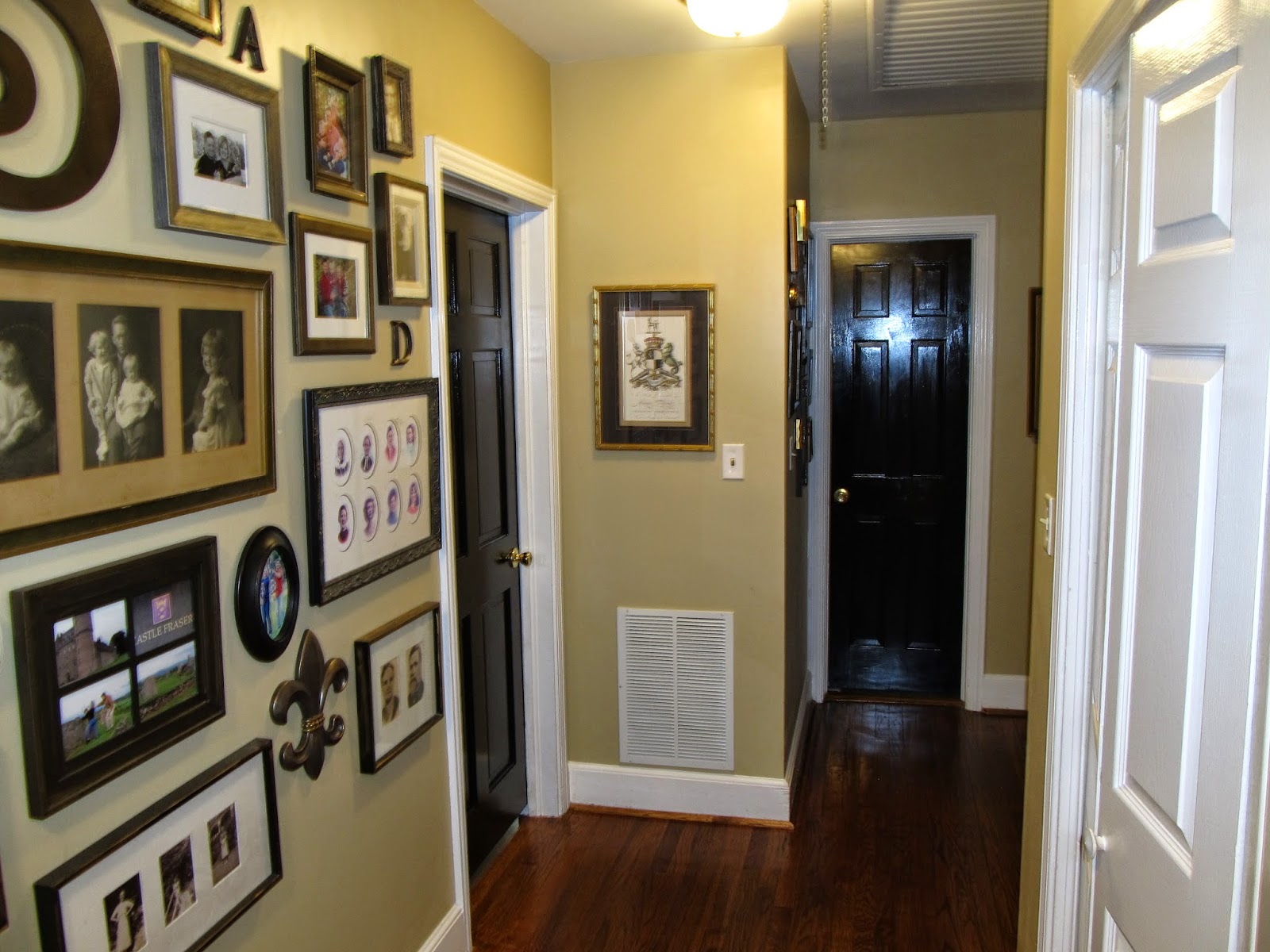 I also painted all the doors in our bedroom and the guest bath black. I hesitated and thought I might paint the bathroom doors (the side that faces inside the bathroom) white but when I was in the process, I just went for it and I'm glad I did. I thought it might clash but it looks great. I really didn't realize how bad they looked until they look so fresh now.

I still need to spray paint the door knobs. They are currently a mixture of shiny gold and a muted gold. They work great so I'll just spray paint a hammered wrought iron color instead of paying for all new knobs. 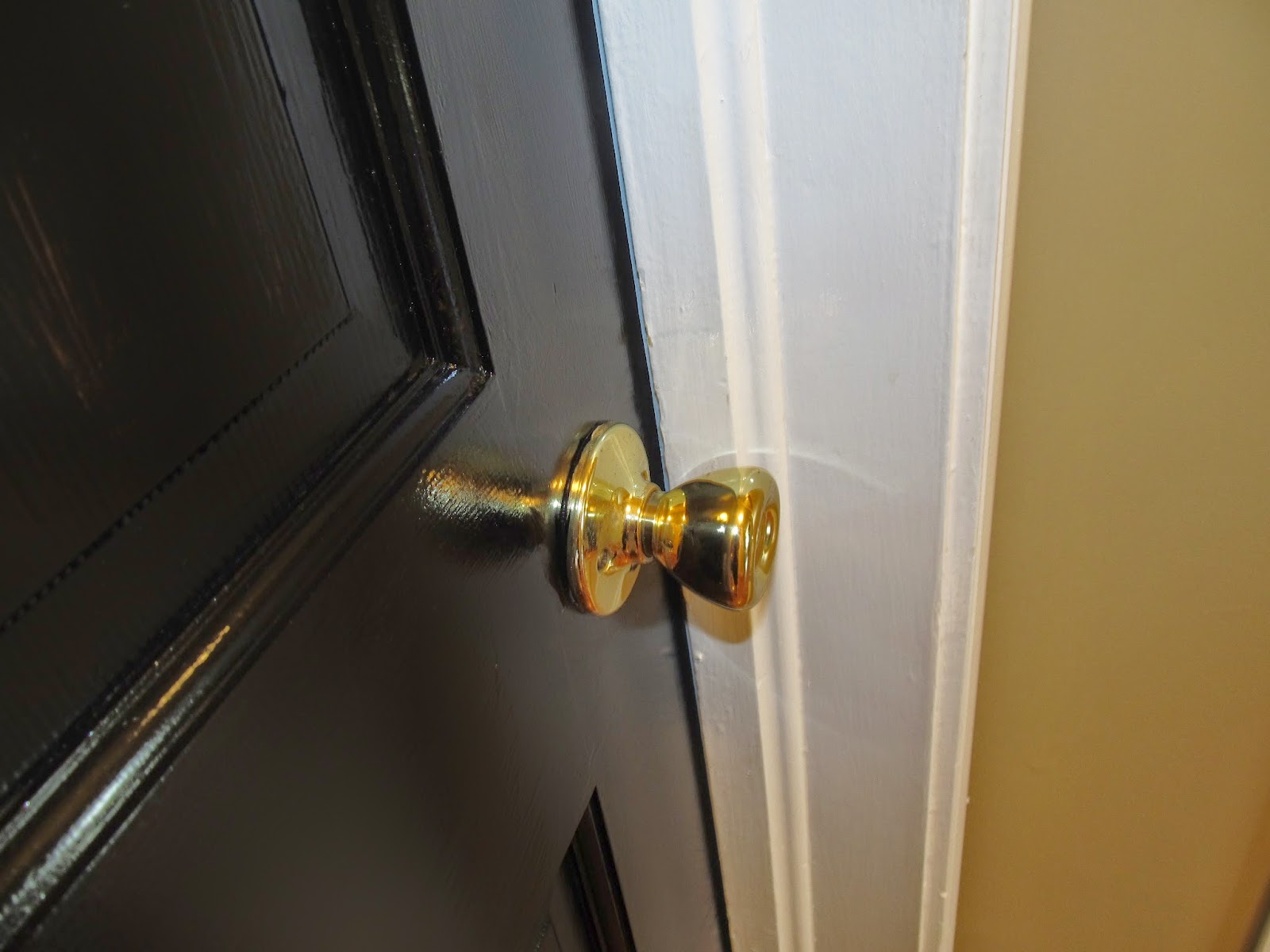 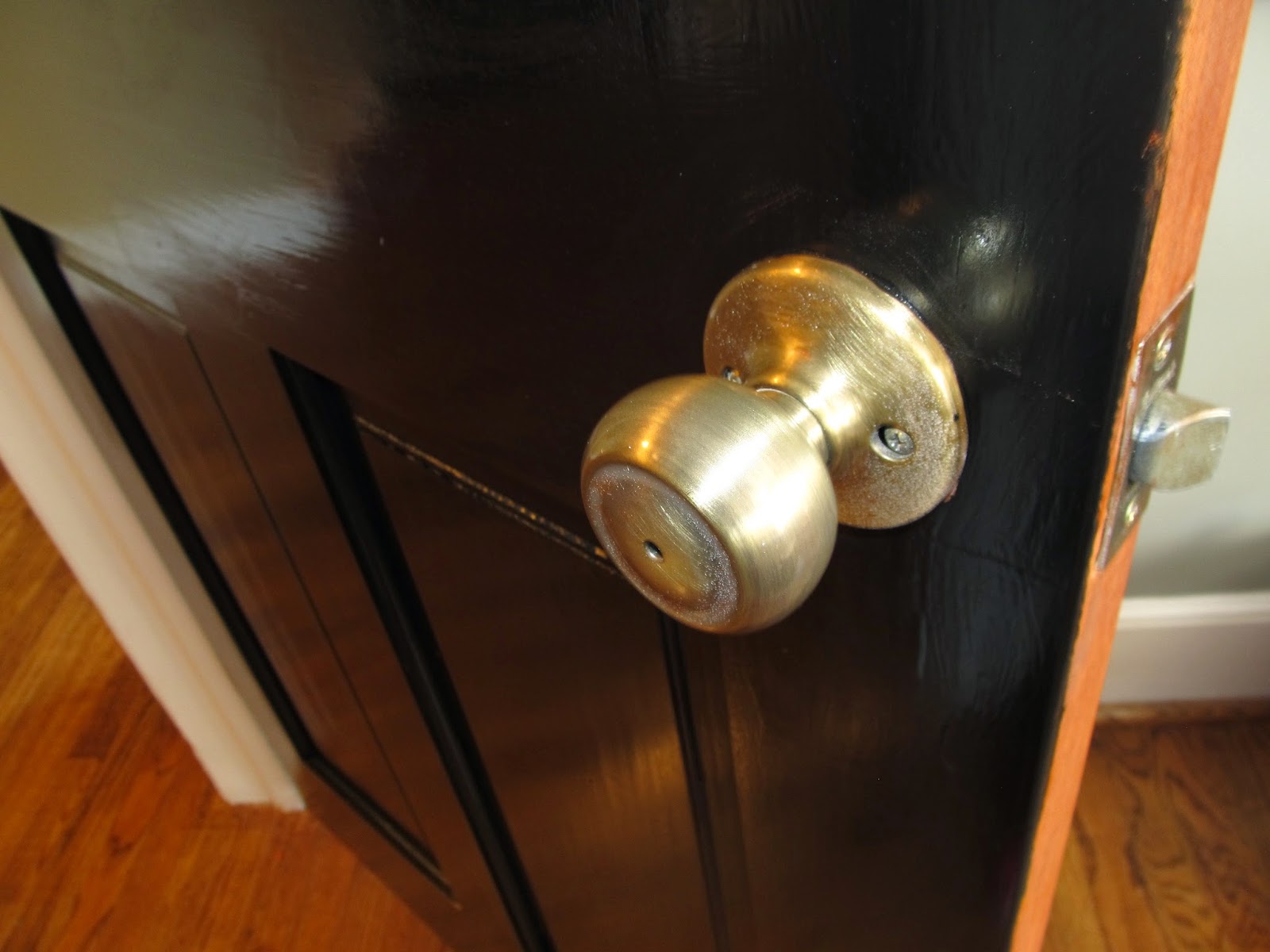 I really did have to refrain myself at one point. I wanted to start painting everything black. I stopped at the front door...tempted but unsure. Thoughts? Any suggestions? I can't paint the trim around the window portion of the door so that remains white...which throws me. The outside is yellow. 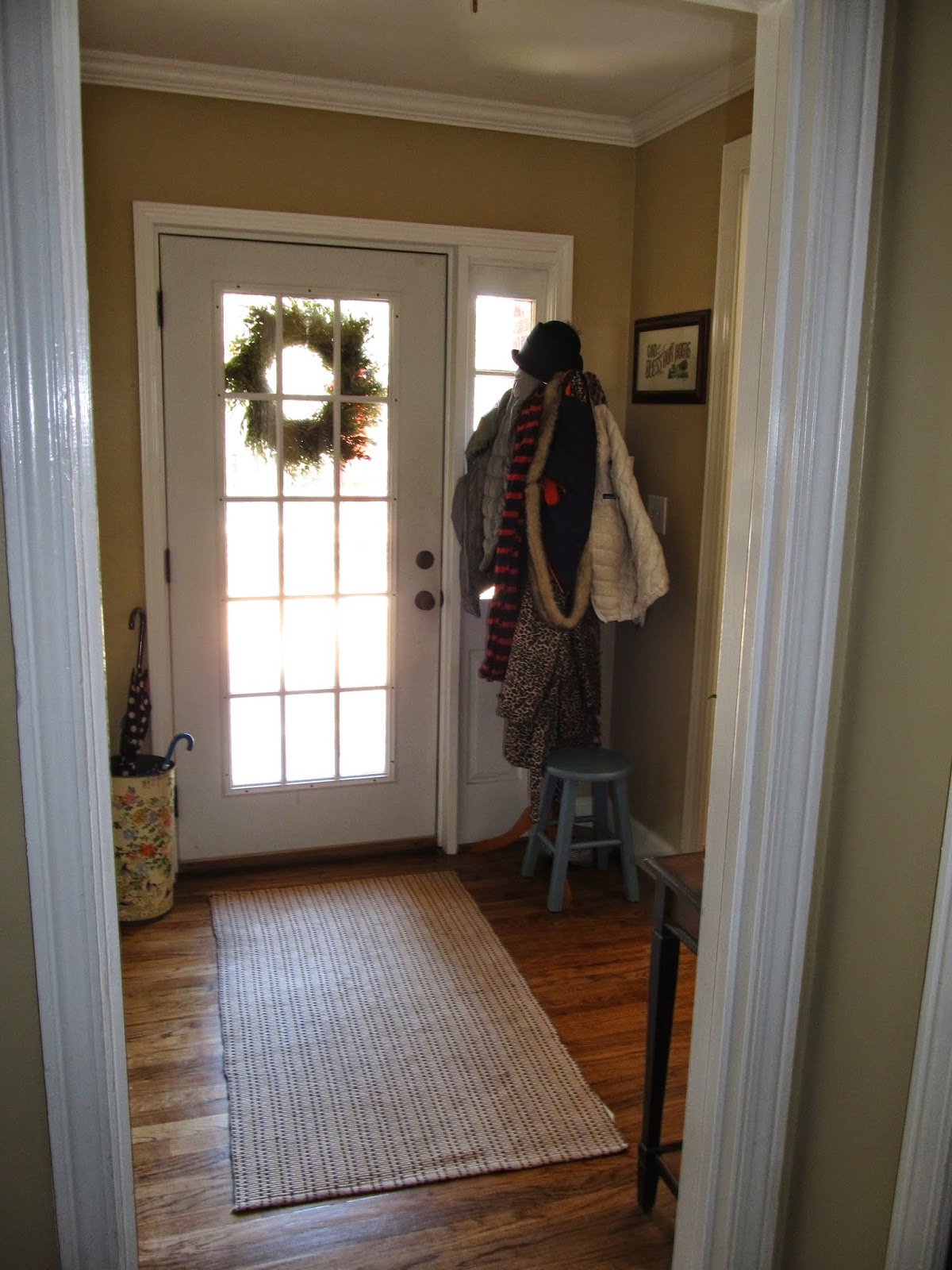 Labels: decorating, design, do it yourself, how to, paint, Schrallville
Newer Posts Older Posts Home
Subscribe to: Posts (Atom) 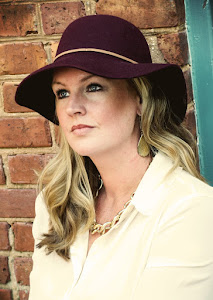